The following article, written by Jared B. Standish in 1959, is from the archives of Wethersfield Historical Society.

According to a memoranda book kept by James Smith, father of the present occupant of the premises abutting, Mr. Charles H. Smith states that John Smith, an uncle who died in 1818, aged 72, pulled it up near “Hang Dog Hill” to drive home his cows from the public cow pasture in Stepney West District (when he was about twelve years old).

Arriving home it was set out in the “Common” front of their home.  According to the record it should have been planted about 1750-8.

When it was about 10 to 15 years old, a heavy ice storm broke off the top, causing it to branch out in six arms reaching for sunlight.  In 1884 a large limb fell during a storm, its growth was so luxuriant.  James Smith told his son Edward (age 15) that he could have it if he would cut it up.  Edward made two and a fraction more cords of wood from it than most anyone else would.  A branch from the main limb fell in 1903 and three years ago in July, upon a quiet Sunday morning, a prominent arm thought it had reached out too far and with some expression lay down to an earned rest.  When this limb was sawn into three one-cord piles, the growth rings upon it were counted.  These favorably corresponded with the age recorded within the diary, allowing fifteen to twenty years for loss of youthful rings in the ice storm and its struggle to reach maturity.  The count figured One Hundred Forty-six, with a short balance grown so closely in the hard fibre as to be uncountable.

It was said that John Wesley preached a Revival service under its shade while upon a trip through the “New England” states.

Richard Belden was the first house owner upon the property beside the tree in 1641 (succeeding Samuel Boardman).  A later generation, Silas Belden, sold the homestead to Josiah Smith in 1742.  Four generations of James Smiths preceded the present occupant.  The old Belden house was taken down in 1864, when the present Smith Hone was built by Mary and her sister, Martha Smith (which has at this time received alterations).

In the early periods the “Broad Street Common” is said to have been very wet.  It is quite possible that “These Elms”, including others (of comparable proportions) four at the upper end of the Broad Street Common (on the west side gracing the front of Reverend Elisha Williams’ “NEW WILLIAMS HOUSE”, later occupied by his son, Elisha Williams, Jr. and Mehitable Burnham, his wife who, with his sister, Mary, built it in 1755 and presented it to their father fourteen days before he died) and another nearly as large as the “Great Elm”, which stood upon the opposite side of the Common in front or near the “Boardman Tavern” (where Jared Ingersol resigned his “Stamp Act” commission, September 19, 1765).  It was hollow and it has never been known how it caught fire and burned out inside by 1850.  All of them grew under very favorable conditions in this particular location for this specie of tree, completing a natural old-age limit, at this time 1750 to 1950.

In 1910 The American Genetic Association, Journal of Heredity, Washington, D.C., conducted a United States census of mammouth [sic] trees.  Our Village Improvement Association was requested to send a sample of leafage, branch and soil, together with measurements of our Great Tree.

This request was complied with, resulting in a complete record being entered at Washington as the “Largest Elm” of its species in the United States.

A reclaimed photograph, taken about 1871, showing the tree in vigorous youth, has been preserved in Washington and at Wethersfield, Conn., and was published in the “Journal of Heredity” during the year 1914. 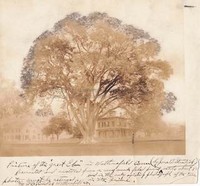 Many statements regarding the age of this tree (and others) have been made in error carelessly, ranging from 100 to 400 years old.  Contest in question have frequently been brought to attention, in reference to other trees bearing close dimensions, in Marietta, Ohio, Hampton, Connecticut, (claiming to be 700 years old).  The “Rathbourn Tree”, Washington Elm at Wallingford, Connecticut, and others.

Letter to the American Genetic Association, Washington D.C. from the Office of the Board of Park Commissioners, Wethersfield, Conn., January 24. 1930

It seems peculiarly fitting that it should devolve upon me to answer correspondence in this matter.  Still being in a position of authority as Secretary of the Board of Park Commissioners and also President of the Old Village Improvement Association (not yet dissolved) – to send to you as before in 1914, a definite statement relating to the “Great Elm”, within our jurisdiction, of which articles have been published widely.

I have caused a resurvey of our tree, which is as follows:

The tree is now only a memory, its life having closed this year 1950.