Home » Articles From The Community » Uncle Al Goes to War

The thing I remember most about the war was how pervasive it was. The movies, books, newspapers and radio all seemed to be about the war and if we should forget about it for a minute there were those posters reminding us about the three bad countries we were fighting represented by their evil leaders Mussolini, Hirohito and Hitler. But I’m getting ahead of myself.

The war started for me on a Monday morning in the second grade. I was 8 years old.  I have a vague memory of excitement in the class that morning; a remembrance of children talking to each other in whispers and then someone saying to me, “Did you hear? The Japs bombed Pearl Harbor!” I had no idea what he was talking about. I gathered from the tension in the air and the hushed tones it was something serious and bad. I tried to look grave.

Shortly after this I heard that my Uncle Al, who used to wrestle with me on the couch, was going into the Army. The great thing about it was that because people said he wouldn’t be back home for quite awhile I could have all his model plane collection. Boy was I happy. At the time it would not have mattered much to me if I had known that Uncle Al would be gone for four years and would never see his to mother or father again as they would die while he was gone. I was just too happy to get those airplanes.

It wasn’t long after my Uncle left that the first thing happened that made me feel that this war business might not be a good thing even in my protected world. My parents, especially my mother, began to worry that my father might be drafted, which I learned meant he might have to go into the army even if he didn’t want to. They never spoke to me or my brother directly about it, but we could hear them talking in hushed tones and every once in awhile my mother would cry softly trying very hard not to make a big thing out of her worries, as you never involved the children in those days.

Finally after some prodding and tears on the part of my brother and me my father told us not to worry. First of all, he had some medical problems which would keep him out of the service and more importantly he worked in the defense industry making parts for airplanes so they needed him more at home than in the army. The health thing baffled me as my father seemed to me to be the strongest person in the world, but I was proud of the defense work stuff…it must have meant that my father was important. My brother and I were convinced but I think mom worried for most of the war.

Some other things began to happen that made me slowly realize that this war might be about more than getting my uncle’s model airplanes. First of all I couldn’t get rubber bands to fly those models and soon after that the balsa wood used to make them could no longer be found in the hobby stores. It seems the Japanese had captured the islands where we got these things so they were no longer available and I was reminded when I whined about this that the rubber we had was needed for tires and life rafts for our servicemen. Then my best friend moved to Ohio.  His father, who sold buses and ambulances, had been called back to the main plant to work. They were now going to make tanks and other war vehicles. I guess he, like my father, was important to winning the war but I did miss my friend. We used to throw grounders to each other all afternoon and play fantasy baseball games. I, being tall would always pretend to be the first baseman and Ed was the rest of the infield. Now I had to play with the younger kids in the neighborhood, jeez! 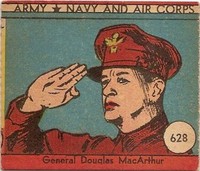 Strange names began to creep into the general vocabulary. Names like Bataan, Corregidor, Midway, Morocco and Guadalcanal. Slowly the supply of new baseball cards dried up and was replaced by pictures of Generals like MacArthur or Patton and Admirals Nimitz, King and Spruance. The cards were all of the same style; a large picture of the hero looking out sternly and in the back ground a battle of planes, ships or cannon. There was no way we were going to lose the war with men like this leading us.