We walk, whiz, or otherwise pass by these places daily or weekly.  We may go past them from season to season.  The names are familiar perhaps, but where did they come from?  Mill Woods, Treat Road, Great Meadow Road, and on and on.  Behind these names are good stories that help make Wethersfield life just a bit more wonderful.  This whirlwind tour of a few select place names will, I hope, help you feel a bit more settled in Wethersfield.

First things first.  Two out of the ten legendary “adventurers” (ten men and assorted family members) from Massachusetts who settled in Wethersfield in 1634, are honored as street names.

The first such name is Oldham Road: in 1623 John Oldham arrived in Plymouth Colony from England.  Oldham was a feisty adventurer and fearless trader, and he went to Connecticut in 1633 to trade with the Wongunk Indians, and brought back beaver, hemp, and lead.  The following year he led the eager and impatient “adventurers” to settle the enticing open land that the Wongunks called Pyquag. 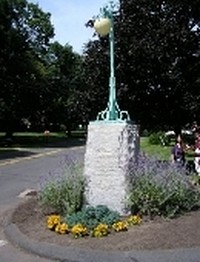 A second settler is memorialized at Foote Path Lane.  Nathaniel Foote was the largest landholder of the new settlement.  His initial tract of ten acres at the southeastern end of Broad Street soon grew to 400 acres.  Foote was a pillar of the community, and happened to raise some of the tastiest pork around.  Look at the south tip of the Broad Street Green and you will see the 1908 monument to his memory, erected by the Foote Family Association. 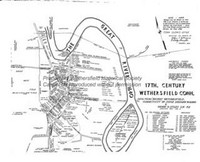 Great Meadow Road is a fitting name for a place of great agricultural importance for the Indians and colonists.  The Great Meadows in 1634 encompassed 3,500 acres of fertile soil, extending into Glastonbury and Hartford.  In 1637, while families were out preparing this treasure land for spring plowing, some 200 Pequot attacked, killing about nine of the settlers and abducting two girls.

Mill Woods Park: Once this place for play was a place for work.  The Chester Mill, located here for over a century, ground grain and sawed wood.  The town purchased the land in 1944 and opened it in 1945 for swimming and picnicking.

Marsh Street was not named for a watery area near the river.  Rather, it honors John Marsh, the revered ninth minister of First Church.  Ordained at Wethersfield in 1774, he served for almost half a century.

Stepney Circle’s name originated with the “Stepney Parish” area of Wethersfield incorporated in 1843 as Rocky Hill.

Nott Street:  John Nott, who settled here in 1636, was a furniture maker and representative of the General Court.  As a town leader, he helped to select the minister and set the boundaries of the town.

Treat Road conjures up the name of a family of distinction and mystery.  Richard Treat of Wethersfield was one of the patentees named by King Charles II in the Connecticut Colony’s 1662 Charter.  His son Robert lived most of his life in Milford, Connecticut, but was here long enough to act as tax collector in 1647.  From 1683-1698, he was governor of Connecticut.

Wolcott Hill Road: Henry Wolcott came here from Windsor, and in 1633 he owned over 1,200 acres.  The area was first called Windmill Hill, for the grain-grinding mill located there. The roadway was laid out in 1868. 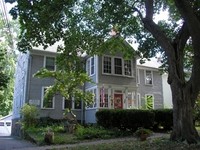 Ezekial Porter Road: Dr. Porter, who died in 1755, was a celebrated surgeon whose skills and compassion, according to legend, helped those in need day and night.

Col. Chester Drive:  There are two noteworthy Colonel John Chesters in Wethersfield.  The first John (1703-1771) was a much beloved member of the General Assembly, a judge, and a farmer.  He gave First Church its steeple bell, imported from England and inscribed “John Chester, 1761”.  John Chester’s son John (1748/9-1809) served at Bunker Hill, and was a Colonel in one of General George Washington’s regiments during the American Revolution.  Washington offered him a Colonelcy in the new Continental Army but Chester turned it down, much to Washington’s regret, and retired to Wethersfield.

Back in 1644, after ten years of building paths and roadways, Old Wethersfield had some of the basic layout that it does today, but with mostly different names.  A sampling: Main Street was divided into three segments, known as High Street, Rose Lane, and Bell Lane.  State Street was Fort Street, Hartford Avenue was Hartford Way, and Garden Street was divided into two segments, known as Fletcher Lane and Watering Lane.

Wouldn’t it be something to close your eyes, and open them to a time when you could meander down these streets of Wethersfield’s past, and visit awhile with people on the road to Beaver Meadow, the Path to the Mill, or the Road to West Swamp?  They could tell you the latest witch accusations or ship built.  You could tell them about the Silas Deane Highway.

This article is posted with the permission of “Wethersfield Life” where it was previously published.